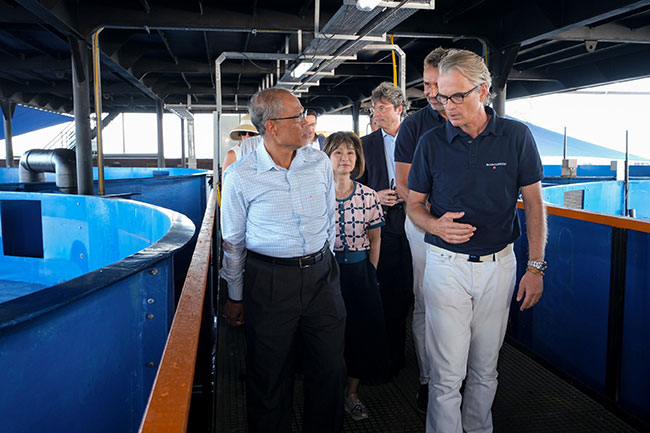 It’s hard to affix a label on Singapore Aquaculture Technologies. Is it a fish farmer? Is it a technology company?

It’s both, says Michael Voigtmann, the company co-founder and chief technical officer. “We started as a fish farmer. And now we’re also a data farmer,” he explains.

But that’s getting ahead of the story. How Voigtmann and company co-founder, Dirk Eichelberger, found themselves in aquaculture makes for an interesting narrative.

A mid-life career malaise often paves the way for a fresh start, and for Voigtmann, it was no different. The German national, who has made Singapore his home for the past 23 years, yearned for a new career that would combine his training as an organic geochemist with his knowledge in agriculture. “After all those years in corporate, I wanted to go back to my roots,” he says.

Farming microalgae for the purpose of biodiesel production won him over because at the time, energy was a hot topic, and biodiesel made from renewable feedstock such as microalgae, showed promise.

As luck would have it, Eichelberger, a long-time friend and compatriot also living in Singapore, was also at that point of looking for a career change. Thus was born Wintershine Asia, a self-funded sustainable oil and protein company that sought to prove the concept of cultivating microalgae for fuel production.

Voigtmann pointed out that he and Eichelberger took on the additional challenge of farming microalgae on floating structures on the water rather than in land-based raceway ponds. The venture excited Singaporean authorities (“We can make unproductive waters productive,” he says). However, they “strongly encouraged” the business partners to add fish production into the mix if they wanted to stay where they were – the marine site is designated as an aquaculture production area.

That was 10 years ago. That paved the way for the company’s transformation and the birth of subsidiary Singapore Aquaculture Technologies Pte Ltd, the island state’s first closed containment fish farmer.

First-generation farm
Back then, a modified barge housed the pilot farm, which was an 80 to 100-ton flow-through operation. “We used the materials that traditional farmers might use, like wood and barrels to support the structure. Those wooden structures, which housed five-ton tanks – because that was the size we were working with – were quite rudimentary,” says Voigtmann.

A second, 250-ton farm equipped with a recirculating aquaculture system (RAS) was installed next to it years later, resulting in what Voigtmann describes as an “improvised hybrid farm.”

The two farms, with a combined 350-ton capacity, started operations in February 2020 and produced 20 tons in July. “The ramp-up has been a lot slower than we hoped because of the COVID-19 pandemic, but we are in the zone, so to speak. What we want to produce in total this year (2021) will be 250 tons,” he told RAStech. A third and fourth farm were scheduled to be delivered in fall 2021. Together, all four farms are designed to produce a combined 1,000 tons of mainly Asian sea bass (also known as barramundi) and some red snapper annually. The harvest is sold locally under the BluCurrent brand.

While RAS operations being built or already established operations around the world are overwhelmingly focused on growing salmon, Singapore Aquaculture Technologies deviated.

Voigtmann explains: “Sea bass is a commonly consumed fish in this part of the world. It’s accepted in the market already. It’s also a good-looking fish. It grows fast, it has a great flesh texture. It’s believed by some to be the next ‘white salmon’. As for adding red snapper to the mix, we want to prove the point that RAS can grow other species, not just barramundi. But we are predominantly farming barramundi, around 70 per cent.”

For a small country like Singapore, 1,000 tons of production per farm is a decent figure, considering that the island state produced only 4,693 tons of fish in 2019, or 10 per cent of local consumption, according to data from the Singapore Food Agency.

“We are building up farm clusters where we would have four to six of our modules and then one module could be a processing area,” says Voigtmann. The cluster in-the-making is located off the eastern coast of Singapore and is roughly 500 metres from a jetty.

“We also want to process on site. In fact, we want to do as much of the work we can out where we produce to cut out all of the costly logistics from the farm to the processor, then back to the storage area, and then to the customer.”

Voightmann and Eichelberger, who is the CEO, are among the new wave of urban farmers hoping to increase local food production in line with the ‘30 by 30’ plan, set out by the Singaporean government in 2019. The strategy aims to source 30 per cent of Singapore’s nutritional needs locally by 2030, up from less than 10 per cent today. The produce of local urban farmers is stamped with a special logo to raise awareness and to rally public support for them. 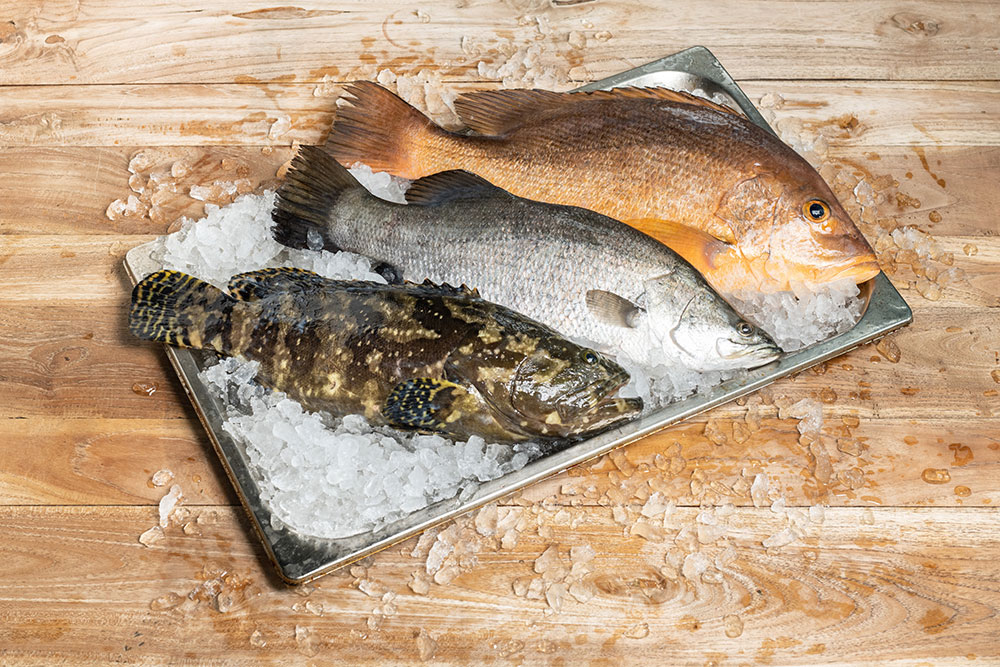 Smart farm
Farms three and four are based on the blueprint of farm two. Each barge housing the fish farm is 100 metres long by 28 metres wide. It has eight to 10 tanks, with each tank measuring three metres in height and 8.2 metres in diameter. Each holds 170 tons of water and can hold up to 12 tons of fish.

It is also hybrid as it is equipped with RAS as well as a flow-through system. “Especially for anyone doing RAS, if you have a disease issue or you have something in one of the tanks that you want to isolate, you want to then put that early on to flow-through before anything starts going strange,” says Voigtmann.

But while farms three and four share the blueprint of the earlier farm, they are much-improved versions: they were built by naval architects and are equipped with the bells and whistles of what today would be described as a ‘smart farm’.

“What we have been working on diligently over the past several years are floating, near-shore structures for aquaculture. With the latest iterations and the directions that we’ve taken, each farm has become digitized, data-driven, and artificial intelligence (AI) -driven. All the pumps, all the equipment, everything that has to do with fish farming: oxygen, liquid oxygen, pump, ozone, valves, blowers etc., all link back to one starter system or data bank supervisory control.”

“Every resource costs money, whether it’s pumped water, oxygen, or feed. So we’re very, very particular about measuring everything; hence all the analytics data, to make sure for instance that we’re not over injecting oxygen, and that we adjust that according to needs as per the biomass. That’s a great thing,” Voigtmann exclaims.

“As fish farmers, the challenge has always been the challenges in terms of the animal,” he continues. “But now, we have a tech approach. The whole data angle is becoming much more interesting than we ever anticipated. And with the AI component that we have, with the visual data and the fish-size recognition, comes a completely new dimension. For the first time, predictions can be made for when something is going wrong or not according to plan, which allows you to take action earlier than you normally would.”

Siemens has also become Singapore Aquaculture Technology’s first institutional investor. It forked out the bulk of the US$6.8 million ($9.2 million Singaporean dollars) financing that Singapore Aquaculture Technologies raised in summer 2021. Voigtmann and Eichelberger see this investment as a validation of their strategy to become the leading supplier of data- and AI-driven aquaculture solutions, in addition to producing premium fish products.

“Together with Siemens, we have the ability to replicate the concept. Siemens itself has an interest that these farms are sold but they have a completely different network around the world than we do as a start-up,” says Voigtmann.

“We’re changing from where we started as a fish farmer,” he muses. “Now we’re like a data farmer because the real value is the data itself and the mining of the data, seeing the correlations and applying those correlations and helping others to see them and even selling that, if you want to do so. We’re gathering a lot of data. People also need to work with us because feed companies, companies who sell additives, you need good data to actually prove your points.”

He couldn’t have chosen a better market for its services than Singapore, a technology-driven megacity that’s in short supply of natural resources and local sources of food.

“Singapore itself realizes it needs to become food secure. Anytime you have a crisis like the COVID-19 pandemic that we’re still in, where we saw the borders shutting down, that heightens everyone’s awareness about the potential of food, and the impact of supply chain disruptions. That stimulates another round of interest and investment into what we consider to be urban farming solutions,” Voigtmann explains.

“I’m bullish on aquaculture as an urban farming concept to feed the urban centres that we have here,” he continues. “Everyone has seen the move towards wealth, and with wealth you have more money to buy different proteins. But from an Asian perspective, fish has always been and remains super important. There’s also increasing awareness of what it means to be a locally-farmed product, what the advantages are, and why you should pay a little bit extra for locally-farmed products. I think there’s a real movement now, it’s starting and it’s actually inevitable.”

Fortuitously, the Singapore government is very supportive of such endeavours. It is opening up more of Singapore’s southern waters for fish farms and is undertaking “all sorts of bilateral and multilateral approaches,” says Voigtmann.

“Singapore is really supporting the aquaculture industry. The government is fostering bonds with Norway, for example. Singapore and countries like it are quickly learning about what others have done and then they will leapfrog over. The talent pool here is also becoming better. Local universities, like James Cook University, has set up an aquaculture faculty. There are research institutes as well. I am bullish about aquaculture and its future,” Voigtmann concludes. 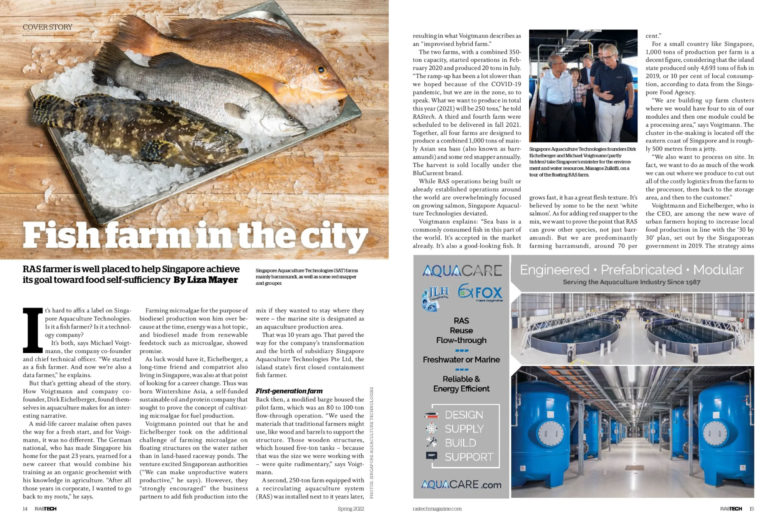