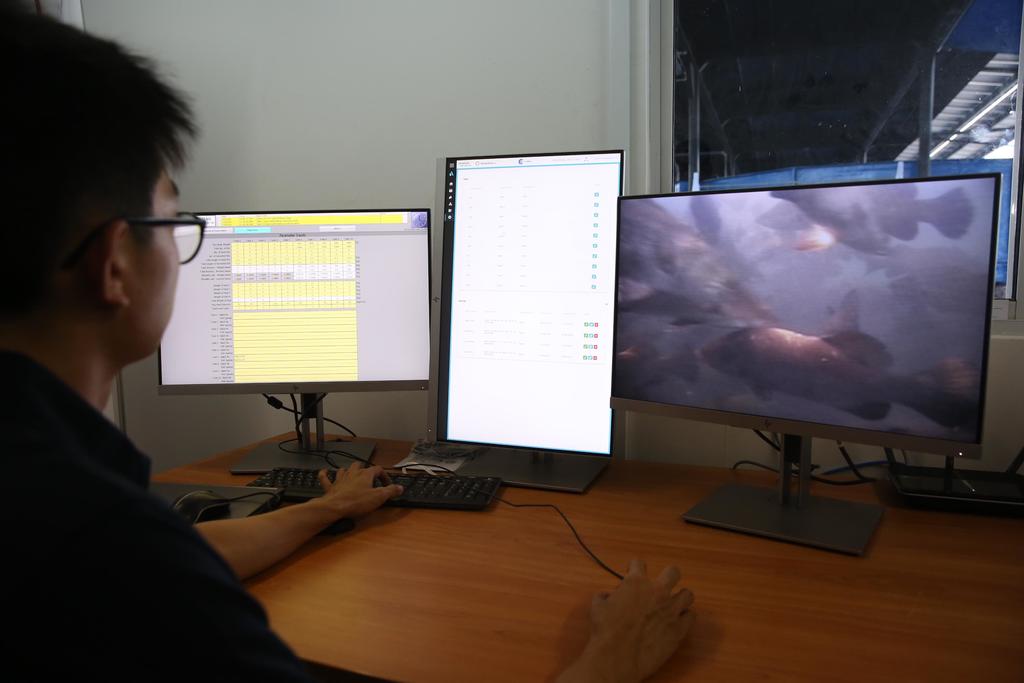 Located off Pasir Ris Coast, the 3,000 sqm offshore facility houses 10 tanks, each of which can hold up to 10 tonnes of fish.

The tanks work on a closed loop system that recycles water and does not release waste into the ocean. In a bid to reduce its carbon footprint, the farm uses solar power to run at least 50 per cent of its operations.

Dr Michael Voigtmann, chief technical officer of Singapore Aquaculture Technologies (SAT) that owns the offshore farm, said that it can produce up to 350 tonnes of fish by 2021 when it operates at full capacity.

This is at least 10 times the minimum yield that a conventional coastal fish farm in Singapore of the same size is required to produce, he added.

Right now, half of its tanks are used, and the fish are sold on online home delivery platform StraitsMarket.com, which is SAT’s sister company.

The farm’s smart system, which was developed in partnership with German engineering company Siemens, is attuned to tracking barramundi — the sole species of fish that it rears for now.

For example, at SAT’s other Singapore fish farms built on barges and wooden platforms along the Johor Strait — none of which are equipped with its new AI system — staff members determine how well a batch of fish was growing by removing a sample of 50 or so specimens by hand and recording their lengths.

However, this is not always representative of the entire fish population.

Now, this AI system uses camera feeds to automatically detect the length of individual barramundi in the tanks, and then calculates the average length of the fish and the average weight of the tank’s population.

It also observes how entire tanks of fish react when fish food is deposited into a tank. The data collected can be used by employees to determine if the food should be changed or if the fish is sick and not ready to feed.

Before this, staff members would have to personally decide whether the fish is full by watching how many of them surfaced for food, making the process subjective and imprecise, Dr Voigtmann said.

The farm can also combine these two features to study which fish foods are more effective in helping the barramundi to grow — by comparing their growth rates to the types of foods offered.

In handling diseases, the AI system’s cameras can detect if a barramundi has a bulging eye infection or white spots on its skin, and will deliver a warning to farm employees, who can then check on each tank in person.

In the future, SAT may add more cameras to its facility that monitor abnormal swimming patterns, such as when a fish swims upward in a corkscrew pattern or isolates itself from the rest of the school — telltale signs for when it is not well.

Mr Masagos Zulkifli, Minister for the Environment and Water Resources, said in his speech at the opening that this off-shore smart fish farm is in line with Singapore’s vision to bolster homegrown agri-food production to make up 30 per cent of the country’s nutritional needs by 2030.“Today, less than 1 per cent of our land is used for agriculture. This will continue to be the case as we seek to ramp up our local produce. Our food production methods must therefore adapt and improve,” he said.

“Food security is an existential challenge for Singapore, but it also provides the impetus to build a strong and vibrant agri-food industry, and foster national pride in homegrown produce.”